From the very beginnings of BotMeNot, we have recognized the importance of Bot Protection of Websites. This is why we have decided to start our new monthly Bot Protection series where we rank 10 Websites based on their bot protection scores. By following this series, you’ll be able to know how protected against bots are the websites you visit!

Before we get to the Jan 2022 bot protection list, though, let’s clear up one thing you may be wondering about. How do we actually get these scores? Glad you asked!

Testing and scoring bot protection of websites is at the core of BotMeNot. BotMeNot runs tests on a website that simulate the behavior of bots and their actions. These bots have certain goals, and based on how well they’re accomplished, BotMeNot gives a score of website’s bot protection. This means that the fewer bots’ goals are accomplished the higher the bot protection score will be and vice versa.

And just one more thing before we get to the list – did you know that BotMeNot is currently in its BETA phase and that you can check it out for free? Furthermore, every beta user gets 100 FREE credits to perform any type of test on any website they want! Make sure to check it out and let us know what you think!

Let’s now see which websites we’ve chosen for Jan 2022 bot protection top 10 list and how they rank up! 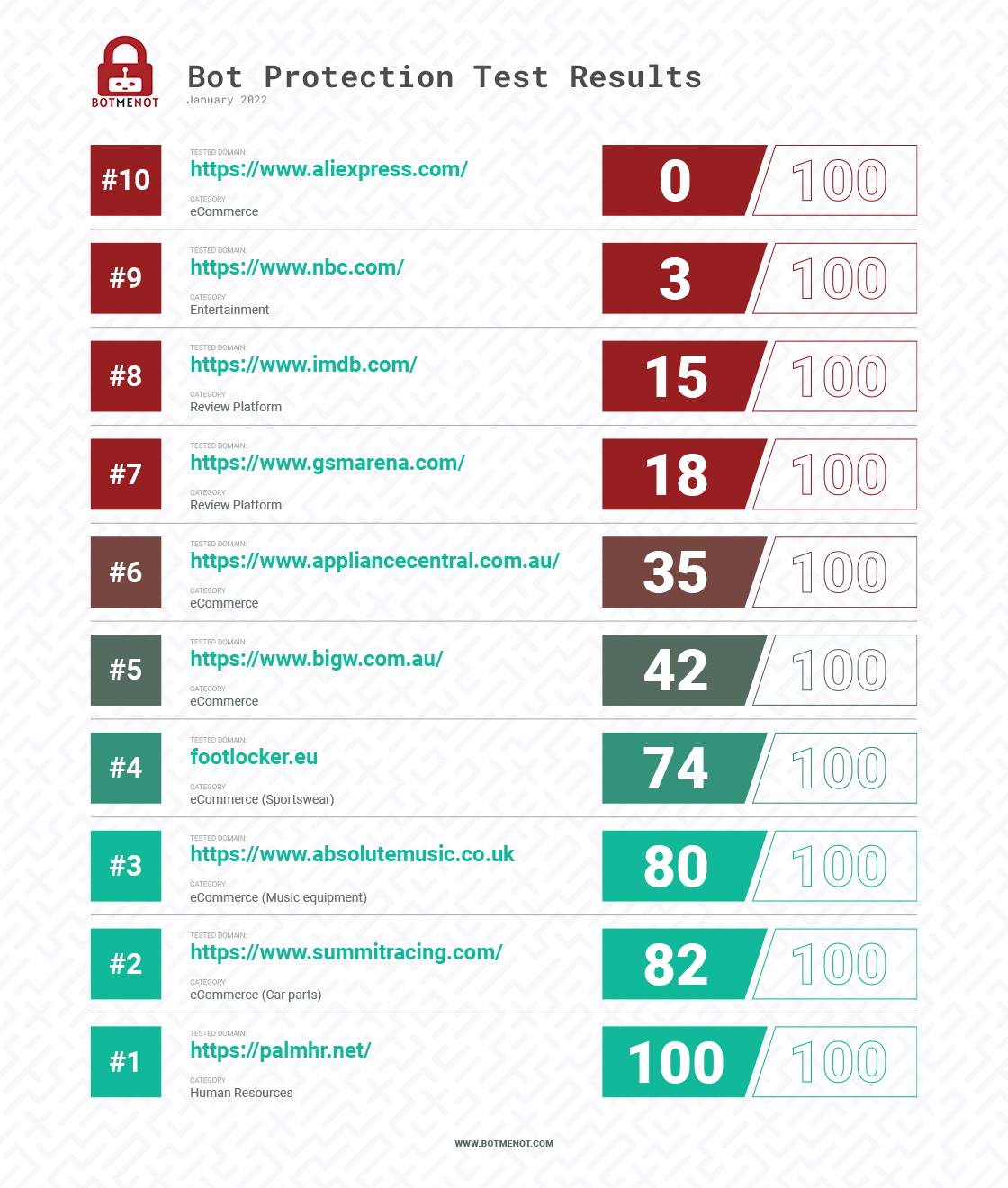 AliExpress was launched in 2010, and is based in China. Over the years it has grown tremendously. However, it seems one aspect of its website is lacking – bot protection. It has a score of 0 on our bot protection test. Could this be a conscious decision?

National Broadcasting Company’s (NBC) website doesn’t score as highly as one would perhaps expect from such a large corporation. As one of the largest commercial broadcasters for the English-speaking audience it should uphold to much higher standards.

Most of us have referred to the Internet Movie Database (better known as IMDb) at some point when we were deciding on the next movie to watch. It’s the world’s largest database of movie reviews. This means that for many people the rating that a movie has on IMDb will be a deciding factor when it comes to watching it or not. However, you could be surprised that it scores very poorly on our bot protection test.

One could argue that what IMDb is for movies, GSM Arena is for mobile phones (and other gadgets). A website that focuses mostly on smartphone (and some other handheld devices) reviews is expected to be aware of the risks that bots carry for their website. Ranking in the lower half of our Top 10 list does come as a slight surprise.

Appliance Central is an eCommerce website specialized in selling household appliances. If we have in mind how important bot protection is for eCommerce websites, we could say that this score is not satisfactory. Among other things, bots on eCommerce websites can create fake orders, monitor prices & other data, and slow down website’s response time (or even completely crash the site).

BIGW is a chain of discount stores, based in Australia. It was founded in 1964, meaning it has a long tradition. Over the years it has grown to stock various types of items – from clothing to household appliances. This also means that as they started expanding ther business online, they witnessed the development of both good and bad bots.

Their score reflects the fact that they’re aware of the importance of bot protection. However, for one reason or another, they’re perhaps not prioritizing it as high as they could. We believe that every eCommerce website should strive to score over 80 points on our bot protection tests.

When it comes to footwear (but also sportswear in general), Footlocker is one of the most popular go-to websites. Usually, you’re able to find many readily available items on it. However, often on Footlocker you’ll have a chance to purchase a more limited item (in most cases those items are limited sneakers).

These types of items get a lot of attention. Numerous bots have been developed in order to make a purchase as quickly as possible. These bots are so fast that humans basically stand no chance. This is why bot protection is so important for websites such as Footlocker.

However, even though this is a relatively high score on our bot protection test, we still think there’s room for improvement.

And now, for our top 3 websites on January’s Top 10 Bot Protection list!

The bronze medal goes to Absolute Music! It’s another eCommerce website on our list, but this one values bot protection much higher than the other ones. This means that the risk of negative effects of bot traffic on the website are significantly lower.

With 2 points higher than the third placed website, our silver medalist for January is Summit Racing Equipment! It’s an eCommerce website for all things car racing. We’re very glad to see another eCommerce website being aware of the importance of bot protection!

Our gold medalist for January is actually not an eCommerce website! This month’s gold bot protection medal goes to PalmHR! It’s a Human Resources Management System (or, in short, HRMS) based in Middle East. Their bot protection score is 100 out of 100 – meaning their website and their app are basically impenetrable by bots.

We can see that bot protection scores of websites is very different. Not all websites place the same weight on this issue.

This perhaps isn’t as big of an issue for non-eCommerce websites, but for the websites that do have an online shop, it definitely should be.

If you’re interested in seeing how protected your website is from bots, make sure to check out BotMeNot! It’s currently in its beta phase and every beta user receives 100 FREE bot protection testing credits!

Also, one more important thing – it doesn’t matter if you want to test your or someone else’s website, you can perform the test on any website you desire!